In case you hadn’t noticed, it’s that time of year again.  Apart from continuing the strange ritual of putting trees in our living rooms and seeing plenty of overweight men in ill-fitting red polyester/velvet outfits, mid December means a review of our favourite Northern Irish beer of the past twelve months.  Of course I didn’t have every single beer that was locally brewed this past year – though I did have a fair few – so this list isn’t exhaustive.  It’s also my opinion, yours will be different.  And that’s good, so don’t be gurning if your favourite isn’t listed.

Celebrating the Belfast bar’s independence from Diageo et al.  Although Kinnegar hails from Co Donegal, this has an NI influence as the bar staff helped in the brewing so it counts in this list.  Also available in keg but I preferred the bottle (yes I did have both to make a comparison).  A bitter chocolate start with the faintest of sour cherry but this is swept aside soon after with a lingering chilli heat that stays on the better side of tasty rather than overpowering.

A cracker of a stout from the north coast co-operative, this appeared as part of Lacada’s Limited Edition Salamander Series range.  Rich with hints of chocolate and coffee.  It’s also available in cask sometimes if you’re lucky – I prefer it in cask just marginally more but others prefer the bottle.  More on this later…

This is also available in bottle form but it’s a much better beast in cask, and I had the privilege of enjoying plenty of it in the Ulster Hall where it won overall beer of the Belfast Beer and Cider Festival.  Lots of smooth passion fruit and mango up front with a delicious bitterness that reminds you this is a beer, not a fruit juice.  Praise also for their Citra and Gorse IPAs earlier in the year.

Ards Brewing Co from Greyabbey in County Down turned five years old this year (in 2011 Northern Ireland had 5 breweries compared to 30 today) and to mark the occasion, brewer Charles created – in my humble opinion – an improved version of his Hip Hop pale ale. This one was brewed using five different hop varieties which made the beer a touch sweeter and more aromatic than the original.

Collaborative brew between Farmageddon and English outfit Renegade Brewery.  Slight citrus fruits at the start give way to a great Columbus/Galaxy/Centennial hop bite with a slightly sweet biscuity malt remaining constant throughout.

Mourne Mountains Brewery in Warrenpoint brewed this amber to celebrate the race event of the same name that starts in Co. Sligo and ends in the Mournes in Co. Down.  Tasty chewy hoppiness with a light caramel and butterscotch aftertaste.

Another one in the limited edition Salamander Series range, this was launched at the Belfast Craft Beer Festival at Custom House Square.  Shame it was in short supply as I found this to be an outstanding beer with the addition of ivy honey from brewer Laurie’s own bees.  Could another one be on the horizon for 2017?

There have been so many great beers from across the border in the past year, coming from the likes of Galway Bay, Yellowbelly, White Hag, Brehon and Eight Degrees among others. But for me McGargles Big Bangin’ IPA blew me out of the water.  Hoppy as you like with an aftertaste that oozes subtle citrus fruit – superb. 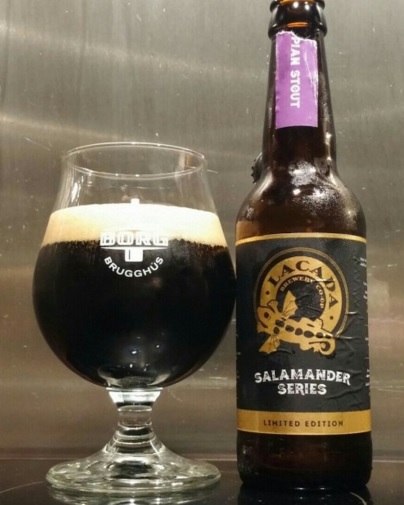 If you’re drinking this in the company of someone from Portrush and they turn to you
and say “it’s a wheeker, sham” then it’s a good beer.  When I first had this in January I described its qualities as bitter, then sweet, then chocolate.  I’ve had it quite a few times since and still stand by those words.  A great stout from the Lacada co-op and deserves to be in its core range in future.This is just a small cross section of the range of styles now available in Northern Ireland. As well as the list above, expect saisons, sours, wheats, smoked oaks and many more.  And fair play to all the brewers brewing them.
Again I emphasise this blogpost details some of the best Northern Irish beers I had in 2016, there are plenty more.  Go find them!