Does the future of Northern Irish beer now pour from a can?

Thankfully the snobbery once associated with cans of beer is fast disappearing as many Irish, British and of course American breweries have been pumping out some top quality brews for quite a while – just think of Whiplash, Yellowbelly, Cloudwater, Beavertown, Magic Rock, Verdant, Evil Twin etc. Top quality right there.

The first Northern Ireland microbrewery to can its brews was Belfast’s Knockout Brewing with Southpaw IPA in late 2016 and this was quickly followed by Newtownards’ Bullhouse canning its entire core range in 2017. More on Bullhouse in a moment.

Third from here to embrace the canning world is Warrenpoint’s Mourne Mountains Brewery with its 100th brew and its first ever double IPA offering, The Wall. It looked lovely and juicy once out of the 440ml can and with a sweet aroma, I bounce on in.

At 8% ABV, The Wall gives an initial pithy and bitter orange/grapefruit bite but this is followed by a piney sweetness shining through, and combine that with a gentle fizz on the tongue, it’s a wall that I look forward to scaling again. (Phew, I’m quite glad I managed to get through that bit without making any rubbish Game of Thrones puns).

This time last year Bullhouse released Notorious P.I.G. and 2018 sees v2.0, now in 440ml cans. Brewer William Mayne now brews his core range in 300ml cans following a successful crowdfunding initiative so the direction of P.I.G. is a natural progression. I quite enjoyed the 2017 version so how does 2018 compare?

Not as well if I’m honest. It’s again labelled as a Maple, Bacon, Coffee Porter but the bacon’s lacking. Ach the bacon’s lacking! Bring me the bacon! I believe any beer that has bacon in the top line of the title should have a distinctively meaty and almost Rauchbier aroma and taste but this didn’t. Coffee was the dominant ingredient here and while there was the faintest whiff of bacon and maple sweetness, I was left underwhelmed. If the coffee was mid table Premier League, the maple and bacon was League 2. I agree that you don’t want the bacon to overpower everything but I’d have liked it to have been at least Championship level. (Non-football fans who don’t know what I’m blabbing on about can stop shaking their heads, I’ve ended now).

Away from the cans and a new beer from a new Belfast contract brewery. Loopland Brewing Co (brewed by Knockout Brewing) launched into the great outdoors with a 4.5% ABV Citrus Pils on draught. My swally came from The John Hewitt pub (cans are also on the way,) so what should you expect?

It’s crisp and refreshing, grassy to start but then the satsuma/grapefruit fruitiness shuffles up alongside with a smile and little wave. There’s a lingering dryness but the fruit loiters around enough to make this a refreshing lunchtime thirst quencher. So refreshing, I had another one. A good start from Loopland, there may also be an IPA very soon.

While I’m on the subject of contract brewing, let it be known that I have no issue whatsoever with contract brewing. For many, it’s the best way to get commercially started – what I do have an issue with however, is the lack of transparency when it comes to labelling where the beer is brewed. I wrote a rant a while back if you’re bothered. As long as contract businesses are up front and telling the whole truth, then that’s fine with me, but let’s not get started on that today.

Finally for this post, a 6% ABV Modern Red from Heaney Farmhouse Brewing. The label’s blurb claims brewer Mal McCay bumped up the grain bill as this is a ‘red beer for the new craft era’. Not quite sure what that latter part means but we’ll crack on and try to make our own definition. 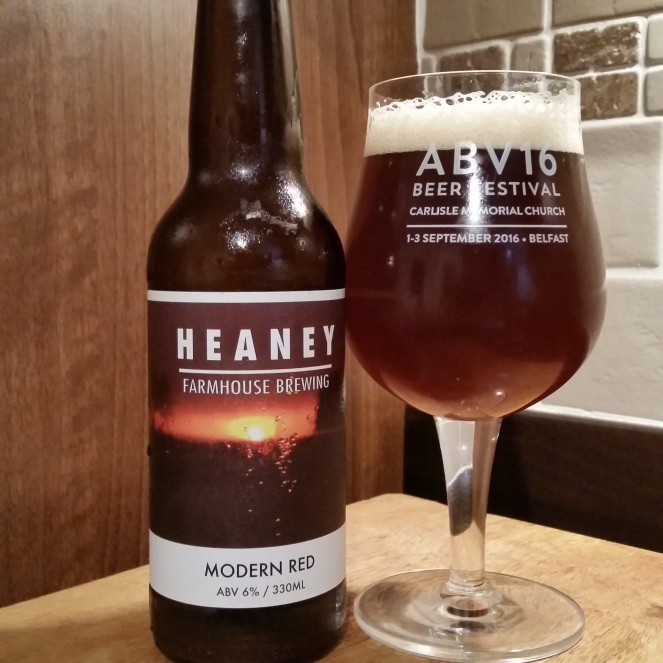 Pours almost a walnut colour and the first sip encounter brings the expected malty, caramel base but in a second this is superceded by an unexpected fruity and spicy body. The more you have, the more you taste a serious punch-up of malt vs hops. I’ve concluded the bout winner by a knockout in the 9th round are the spicy hops. I’m not sure if this I could sink a few of these one after the other in a bar as the spice dominates after a while (hence the 9th round victory) but if this Heaney red is reflective of the so-called ‘new craft era’, then I’m a Follower.