A few more Double IPAs floating around the ether and picking up where I left off, Whiplash is renowned across the island of Ireland as one of our best beer makers. Brewer Alex recently paid a visit to the Portrush Beer and Food Festival where he poured some of his sought after beers, including DIPA Let It Happen.  And he has another couple of similar-style brews on the go.

Saturate has been available for a couple of months and I thought I’d give it that time to round off before utilising the ring-pull.  Just a personal preference but I feel it tastes better at that time, rather than drinking the beer a week after canned/bottled.  It’s initially soft and fruity then the monster grapefruit bitterness hits.  This reminds me of grapefruits my granny used to give us for breakfast as kids when we stayed over at hers.  Proper oldschool grapefruits, remember them?  Then when your palate becomes accustomed to the grapefruit, you find there’s some sweet blood orange in there too.   To be honest it has more orange and mango sweetness than some ‘orange’ beers, making it a really moreish brew.  Saturate belies its 8.0% ABV, it’s far too easily gone.  Buy two cans if you see them. 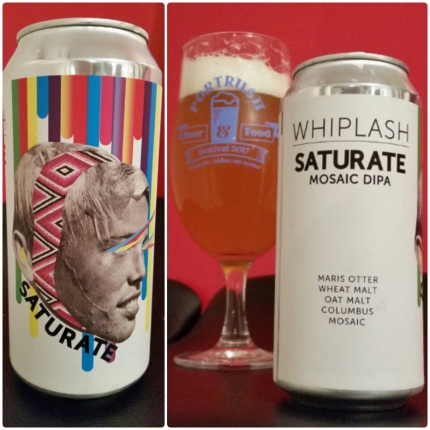 Another DIPA offering from Whiplash (most times the magic happens at the Rye River Brewery site in County Kildare if you were wondering) and a collaboration with Galway Bay goes by the name of Gravity’s Rainbow.  Coming in at 9.0% ABV, I found Gravity fruitier than Saturate but still had that clear and golden shine throughout.  Some sharp bitterness here but smoother overall fruity hop quality.  Strangely the bitterness and alcohol dipped in an out like some sort of hokey cokey.  I’ve no idea how it happened but it did, with some mouthfuls tasting more bitter and feeling stronger than others and that’s fine in my book.  Gravity’s Rainbow is maybe not as refined as Saturate but hey, Eric Cantona karate kicked yer spectator man and people still loved him!  Though it’s still not as epic as Let It Happen. 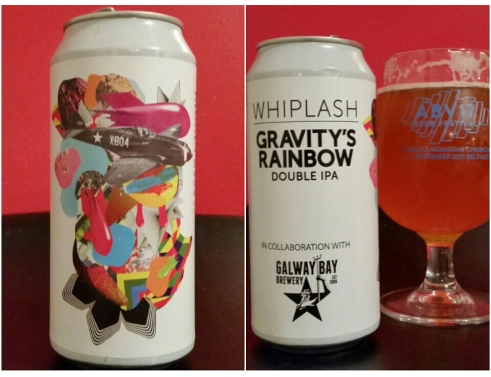 Finally for now, many thanks to Ruairi for grabbing me a bottle of Hillstown‘s first DIPA, The Crazy Horse, from the brewery’s farmshop near Ahoghill in County Antrim.  At 8.5% ABV, this looks deep, cloudy and heavy but with the label telling me to expect tropical and grapefruit flavours I expectantly dive in.  Yes there’s some of that fruit there but I’m not getting a lot of it, certainly not as much as I’d want.  Those anticipated fruity notes are suppressed somewhat by the stronger vegetal elements present – onion and cooked cabbage wafting around.  One glass was enough for me. 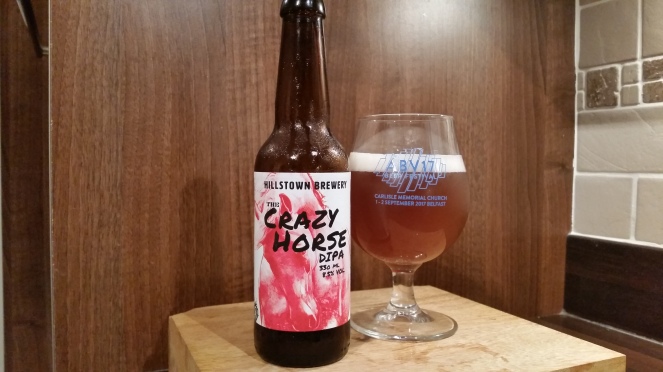 One thought on “DIPA Delights Pt 2”