The 2nd Portrush Beer and Food Festival has just ended and if you missed it, you fool!  A three day smorgasbord of some of the top Irish brews in a small County Antrim seaside town, out of season, should not be sniffed at.

The venue was once again the town hall, an issue I’ll come back to later, but for now an historic and beautiful location in the town centre (opposite Barry’s amusements if you don’t know where).  Most brews on offer were poured by the brewers themselves or folk connected with the brewery.  Naturally, the town’s own co-op brewery Lacada was there and joined by their Glasgow friends Dead End Brewing.  Other breweries pouring included new boys Beer Hut from South Down and revered southern outfits Yellowbelly and Whiplash.  More on them later.

Let’s get started with Lacada‘s new 5.5% ABV Raspberry Citra Smoothie IPA.  This is a re-incarnation of a tasty mid-summer brew by top Portrush homebrewer and co-op member Greg Wallace, who advised on the brewing intricacies of this IPA.  What you get is a fruity but well rounded raspberry and lactose smoothness with just enough hop quality to remind you it’s an beer, not a raspberry ripple ice cream.  So don’t feed it to the kids. 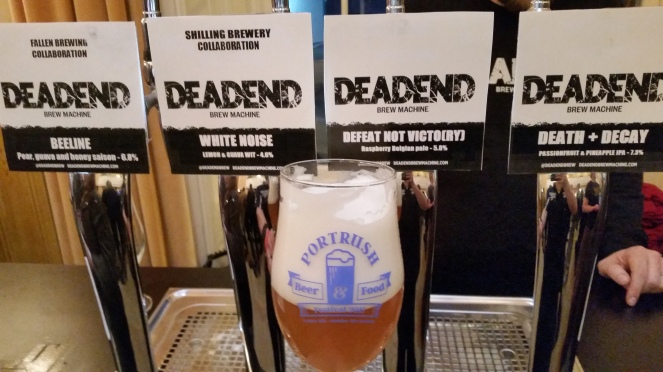 Dead End Brewing from Glasgow brought more beer than they had pumps hence you only seeing four pumps here.  I opted for the all-Scottish collaboration with Fallen, a 6.8% ABV pear, guava and honey saison called Beeline.  Now I don’t fill my face with guava on a weekly basis so I apologise for not having a clue what that tastes like or how it should enhance a beer but there was definitely a sweet hue from the pear and honey clashing superbly with the expected saison spice.  Dead End is a new brewery experience for me and one which I’ll return to with high expectations.

We’ll cross the border and welcome the Yellowbelly fraternity back to The Port fold.  It was great they made it up last year and they returned with a stonking great six brews on offer the Friday night I was there.  Boom.  Are You Not Entertained 9% ABV DIPA please.  PS. I am entertained.  Tropical dankness up top (oops I used that word) with a really tasty and lightly sweet malt base underneath.  Yellowbelly continuing to do what they do best, making superb beer.

Finally the Whiplash boys.  It was fantastic to see them take the time to pay a visit to Portrush.  If you hadn’t heard of or experienced their beer before the festival, man, you were in for a treat.  It’s rare to have a poor Whiplash beer so expectations were very high.  Expectations were met. 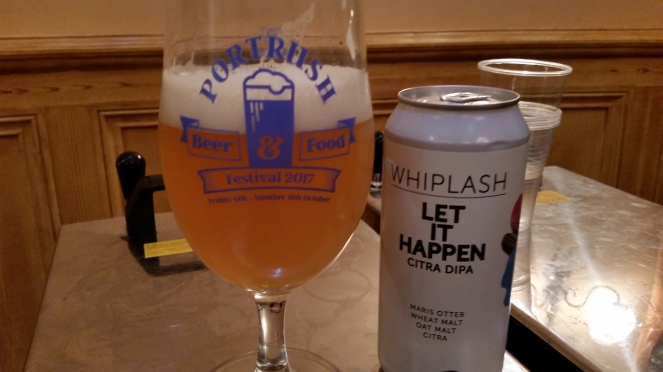 The 5.5% ABV pale ale Fantasm Planes felt deliciously light and fruity, loads of west coast US hops pumped in there and could quite easily be anyone’s beer of the festival… if they hadn’t had the 8% DIPA Let It Happen.  Ah man, where to begin?  The Citra hops grab you by the ging-gang-goolies and whip you around the room – without mercy, it’s fantastic.  If you see this beer on sale, don’t just let it happen, make it happen!

That was the 2017 Portrush Beer and Food Festival, a superb event well worth making the effort to attend.  Some points might need to be addressed for 2018 though.  Is the festival a victim of its own success?  The town hall is a great venue but in my opinion it’s now too small for such a good festival.  Can a larger venue be found that will accommodate more brewers and festival goers but still be as good a location as the town hall?  (What used to be called) Traks nightclub across the road maybe?

And finally my bug bear – musical bands at beer festivals.  Don’t get me wrong – I love music, passionately.   Just not at beer festivals when I’m trying to have a conversation with someone and every word they’re saying is being drowned out by some half-arsed attempt at Stuck in the Middle With You.  Why the need to have them?  I don’t know.  Some of the best festivals I’ve been to recently had no music and do you know what?  I had a flipping great time being able to chat to folk.  Have ambient background music if you must but bands at beer festivals doesn’t work for me and I know it doesn’t work for many others.

That aside for the moment, put Portrush Beer and Food Festival in your diary when the dates are announced for 2018.  You won’t regret it.

3 thoughts on “The Port Took a Whiplashing”