This month I visited my new favourite beer festival.  A week after the superb ABV in Belfast, it was the turn of London to do its inimitable thing.

For various reasons, I don’t usually get the chance to attend beer festivals outside of Northern Ireland but when acclaimed London brewery Beavertown announced in January they were hosting their first festival in September, my eyes lit up.  Tickets, flights and accommodation booked early doors and the County Antrim hallions were on tour eight months later.

Beavertown’s Extravaganza took place at Printworks, a 95,000 sq ft former newspaper factory in Canada Water and hosted more than 60 of the world’s great brewers.  Now this is how to host a beer festival on a massive scale!  More food stalls than you could shake a stick at, three large warehouses of beer pumps, as much seating as you wanted and a double decker bus slap, bang in the middle of it all.  Some teething problems for sure like any event’s first run (water stations were a nightmare in places) but come on, this was something else.

The glasses were only 100ml but with around 150 beers on offer on the Friday I was there, I wanted to make a serious dent in my wishlist.  And so to the beers themselves – you name the style, it was probably there.

Three of my favourites included two imperial stouts and a DIPA, hey, I can’t help it if I prefer a beer over 8%.  Just stop judging me! 😀

3 Floyds Brewery from Indiana, USA brew the superbly delicious 9% ABV Permanent Funeral double IPA.  Malt laden but with a humungous dollop of hops that balanced the whole thing out, bravo.

A surprise find came from Californian outfit Bagby Beer Company.  Pardon my ignorance but I’d never heard of them until now.  And the main reason I tried their monster 14% imperial Biggie Stout was that there was no queue at their taps!  Yet a few feet away there was a 20 minute queue for another brewery’s beer.  Life’s too short folks, look around you.  Aged for 18 months in a bourbon barrel, this is sweet yet heavy and oozing with dark chocolate.

But the beer of the festival drew me in with excitement simply by smell alone.  One of my cohorts had been given a glass of Anagram Maple Stout, a collaboration brew involving Swedish breweries Omnipollo and Dugges.  The aroma exuding from the glass grabbed my nostrils like one of those cartoon scenes involving Tom and Jerry -y’know, when Tom smells something delectable and floats towards the item in question?  I could smell the maple from 3 feet away, like Sunday morning waffles in a glass.  The taste led on from those maple-drenched waffles with a magnificently smooth and creamy 12% ABV stout being filled with little bursts of blueberry.  Good God, this is sublime. 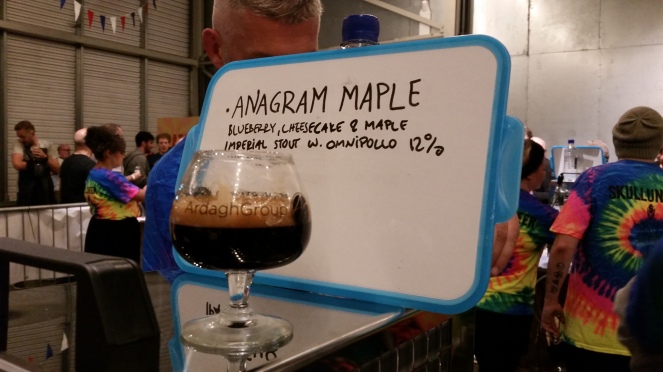 Make no mistake, this was a quality beer festival and it was great to see quite a few folk from Ireland, north and south, had made the journey over.  I’m sure they’ll all tell you they had fun.  Beavertown produced their own 90 second video of the event, check it out and make sure you’re there in 2018. 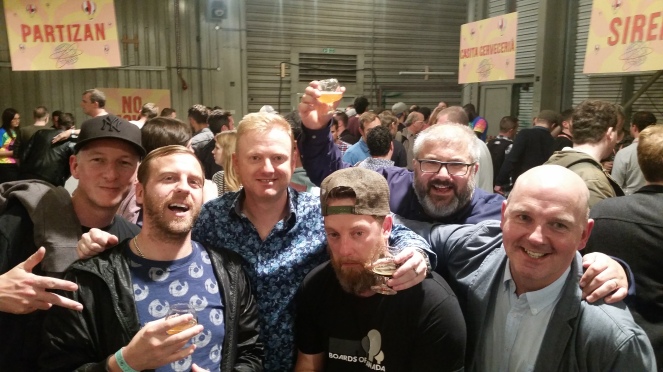