Northern Ireland’s exploding with breweries at the moment – at the last count I made it 7 have started up in 2015 with another couple more on the horizon.  The latest venture to officially launch are Mourne Mountains Brewery in Warrenpoint.  The men behind it are owner and local man Connaire McGreevy, and master brewer Tom Ray from England.

Their launch last week in the grounds of Kilbroney Forest Park in Rostrevor was different to say the least. Never before had I seen or even heard of Slángha, a legendary figure who travelled from Greece and was (supposedly) one of the first people to produce beer using water from the Mournes, but he made an apprearance anyway.  Thankfully he brought stemmed glasses with him – how cultured of these ancient warriors.  You’ve learned something today if nothing else. 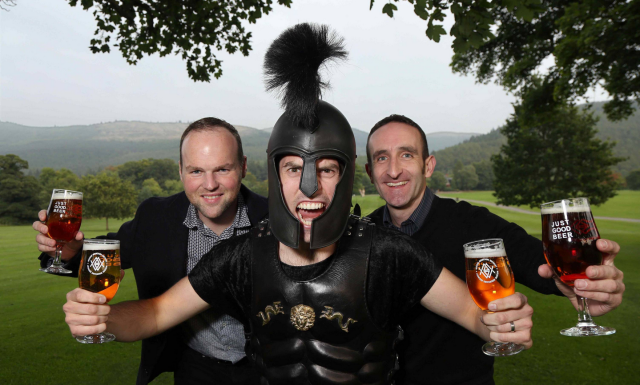 Mourne Mountains Brewery produce a core range of three beers – Gold, red IPA and wheat beer with a couple of seasonal specials just released last week: an IPA and pilsner.  I’ll not bore you to death with detailed reviews of each; suffice to say my favourites were the East Coast IPA and the surprise cask of Mourne Gold which was laid on as a Brucie Bonus. Seek them out wherever ye be.

One thought on “Northern Ireland’s Newest Brewery … so far”