This year’s Irish Craft Beer Festival at the RDS in Dublin was a special one for me as it was the first time I stayed to the bitter end due to having the genius idea of booking an overnight hotel stay.  What a smart cookie I am.  Mrs W and I travelled down by train on Saturday afternoon, checked in and then made our way through the hoardes of Irish and Welsh rugby fans leaving the Aviva stadium.

I always get excited entering a beer festival.  Right RDS, bring it on, seven hours of bliss await… but where to begin?  I’d read positive comments about new Two Sisters Brewing’s St Brigid’s Ale so made a beeline for the Trouble Brewing stand.  A good solid start, 5.2% brown ale with a delicious caramel and nutty aroma and taste.  Slightly sweet too as it’s brewed with honey from the family hive hence the pathetic beeline reference.  Did you know Brigid is Ireland’s patron saint of beer?  You do now. 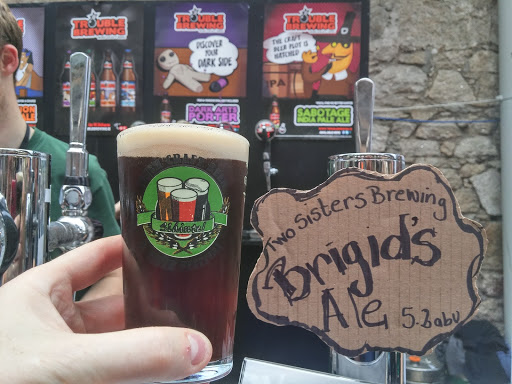 A Thai dinner followed out the back courtyard, courtesy of the fantastically named The Bitchin’ Kitchen – green chicken curry and for Mrs W beef pad Thai noodles.  Bellies full and it was back to the beer, this time to check out the Yellow Belly/Simon Lambert & Sons stall.  The lapsang souchong Black Tea porter was so smooth with that superb tea hit coming to the fore.  Tea and beer in the one glass, what’s not to like?

Another beer of note came from the guys at Northbound Brewery near Derry/Londonderry/whatever. They’ve recently produced a pale ale and Kölsch style which I have already tasted but on tap was a new festival special, Unnamed IPA.  I had a few (single) IPAs that night but this was my favourite.  Hopefully it’ll find its way into bottles very soon. 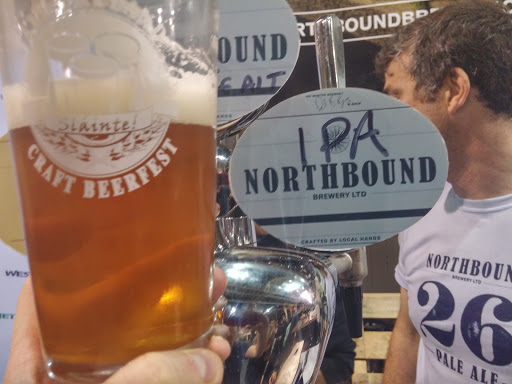 Finally my beer of the night – drum roll please – comes from Co Wicklow’s O Brother Brewing with the outstanding 9.1% abv double IPA Brutus.  Despite the high alcohol content, it is deceptively smooth with a slight tropical edge that is calling out to be consumed again.  I did go back later in the night but it was sold out.  Lesson learned there.

Thanks to whoever thought of putting all the food vans out the back beside the DJ and sheltered seating area.  Well done to the committee person who suggested having goblet glasses – unfortunately when I arrived they’d all been taken so had to make do with standard glasses.  I would have loved to have had one, they looked fantastic.  And finally thanks to organisers Carlow Brewing, Make It Happen, Beoir and all the brewers who attended, it was another great festival.  See you in 2016.  Sláinte!