I’d been wanting to get up to Walled City Brewery in Derry/Londonderry/whatever for quite a while and finally managed it one recent Sunday afternoon.  Not just any Sunday but the Sunday after the Club MTV concert right outside the brewery in Ebrington Square. I’m quite ashamed to say that as someone who used to follow the Top 40 religiously in the 80s and 90s, I had not one clue as to who any of the acts were. Nada, nil, zilch. Ah well, it’ll come to all of you sooner or later. 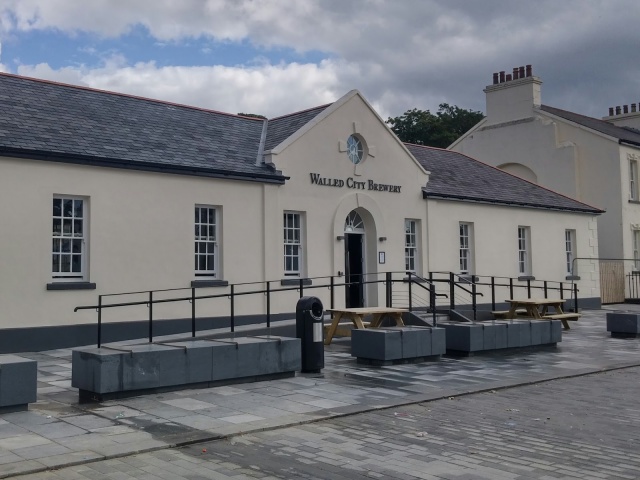 The restaurant opened at 2pm and this particular day was interesting as most of the staff seemed to be bleary eyed from the work exertions the night before. It was used as the concert’s VIP area and was bunged to the gills apparently.

Ten fantastic taps are on offer and not one of them from any of the usual bland big boy suspects – you know who I mean. The day I was there with the wife and 4 year old son, they had guest offerings from Beavertown (London), Kinnegar (Co. Donegal), Magic Rock (W. Yorkshire), The White Hag (Co. Sligo) and Mad Hatter (Liverpool).

Meals were ordered and after a long delay (which was acknowledged by owner James) we were given a free tapas of olives.  None of us like olives so maybe it would have been better to ask us rather than have me pass them over to the grateful diners opposite.  Having said that, when lunch arrived my beer braised pulled pork with house coleslaw in a brioche bap as well as Mrs W’s grilled steak in a bap with rocket and goat’s cheese were delicious.  Be mindful that as this is a restaurant, you must order food to be able to avail yourself of any beer.  And so to that beer…

Walled City Brewery usually have a two or three of their own brews on offer and James later told me his plan is to occupy half of the ten taps with his own beer.  The 4.2% abv American pale ale, Boom, is their signature beer and one of the best I had that day.  Fresh with a light citrus edge I could have had this all afternoon. This was followed by the pilsner, Kicks at 4.5% – I’m not a great fan of pilsners or lagers but appreciate that it ticked all the boxes required of that style.  Conditioning in the back but not yet ready were also a wheat – Wit – and IPA – Stitch – and I’m sad that I missed their chilli and lime infused beer called Beerito. If only it hadn’t run out the week before I landed up.

It’s great to see a flurry of activity in Northern Ireland’s north west beer scene.  Three breweries, Walled City, Northbound and to a lesser extent O’Connor have now entered the Derry-Londonderry market over the past twelve months.  Here’s hoping they all go from strength to strength.

And if you’re a Derry wan or happen to be visiting the city sometime soon, do yourself a big favour and cross the Peace Bridge to Ebrington Square for some seriously tasty grub and a fantastic beer selection.

One thought on “Maiden Visit to Walled City Brewery”