Northern Ireland now has 31 businesses registered as breweries (I’ll refrain from simply calling them all breweries – it’s complicated)  and something that’s been on my mind for a while now is their beer quality – or lack of.  In 2011 we had a mere five such businesses and it’s increased by over 500% in six years.

#31 on the list, Fifth Quarter, started a mini twitter investigation when it was first spotted.  Who’s this?  Where’s it from?  Is it a contract?  Who by?  A short while later we deduced it was a contract brew by Hilden for distributor Drinks Inc – all of which isn’t on the label.  Why the hell not?  What are you afraid of?

More rantings on this issue in a previous post here.

Anyway down to business and when I saw Fifth Quarter’s lager and red ale offerings in a local Centra, I worringly ignored some online reviews and bought them in a 2 for £5 deal.  “Value for money, my arse” as Jim from The Royle Family would no doubt shout. 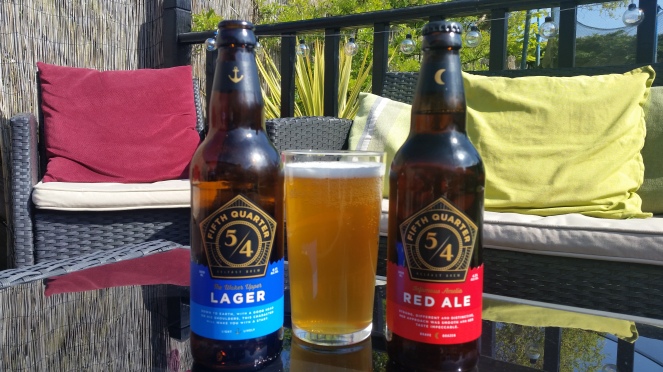 First into the glass was The Waker Upper, a 4.1% ABV lager.  Not much carbonation with not much of an aroma to match.  That bodes well.  There’s a light lemony essence on the tongue which pleased me as it was my first beer on a warm and sunny afternoon just before lighting up the barbecue.  Let’s face facts here, it’s not bad for what it’s meant to be – a guzzler for days like this – but it’s nowhere near the standard of what I would call the new benchmark for Irish craft lager – that being the recently new offering from Yellowbelly in County Wexford.   Still, if you’re into lagers it’s still better than supping Carlsberg all day.  Probably.

Following on from the lager is Infamous Amelia, a 4.3% ABV red ale.  Now, sometimes if you’ve nothing good to say then say nothing.  This is not one of those times and I’ll bloody well say it.  This stinks.  There was no carbonation – as flat as Wile. E Coyote falling off a cliff and then having a boulder land on him – the head disappeared in a couple of seconds, no aroma and I was about to get my torch out to see if I could find anything tasty at all about it.  I managed about a quarter pint before giving up all hope and pouring the rest down the sink.  I think I’ll pass on the IPA and wheat beer also available.

Too many times I read blogs ooohing and aaahing about stuff.  Be honest, how often do you read a review on something which is utter rubbish?  I’m a generally happy fella but times like this melt my head.  Why is this bland and flat beer on sale?  Do the owners of Fifth Quarter/Drinks Inc actually try the beer before it hits the shelves?

So many questions and to be honest, you shouldn’t bother waiting around for an answer.