The Hallowe’en party time has come and gone and kids everywhere have thrown their manky old and wilted pumpkins in the bin.  But what else is a pumpkin good for apart from displaying on October 31st?
Soup, stew, even ravioli.  What about … beer? Now bear with me on this, don’t screw your nose up like that.

One of my favourite Ulster beers is from Rathmullan in Co. Donegal, Kinnegar Brewing’s Long Tongue – a pumpkin beer with added ginger. This review doesn’t include that one as it’s not yet on the shelves, will be soon though.

Over Hallowe’en I did manage to track down 5 pumpkin beers and here’s what I thought of them.  (The quick review is Beavertown’s Stingy Jack is the best by a county mile – the longer review is below)

TROUBLE BREWING’S PUMPKIN BREW (County Kildare)
4.5% abv
Red ale with strange spice mix.  Could have had more pumpkin flavour and also a bit too sweet for me.

BEAVERTOWN BREWERY’S STINGY JACK (London)
7.2% abv
The Beavertown website website modestly states this as “The best damn spiced pumpkin ale you will ever sup on. Fact.”  And batta bing, they’re bang on the money.  This phenomenal beer is brewed with maple syrup, nutmeg, cinnamon, cardamom, ginger, clove and cinnamon!  Hunt it down, buy a few and repeatedly enjoy.  Oh yes. 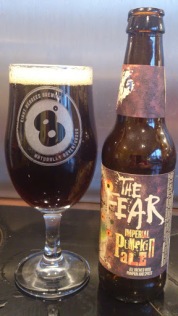 FLYING DOG BREWERY’S THE FEAR (Maryland, USA)
9.0% abv
The strongest of the lot here, this rich imperial porter does pack an alcohol punch.  In my opinion, the alcohol greatly overpowered the taste of any actual pumpkin.  Bit of a shame.  It was still a decent slightly spicy beer but fell short of tasting how a pumpkin beer should – that is – of pumpkins.

RED HAND BREWERY’S PUMPKIN ALE
(Co. Tyrone)
4.5% abv
I first tried this just after Hallowe’en and I have to admit I wasn’t impressed. Very sharp and bitter (Mrs W even made a comparison with TCP).  I tried another a few days later in case I had a bad bottle.  It was the same – so bad I had to throw it down the sink.  And I hate doing that.
(Edit. Simon from Red Hand saw this review after publication and very kindly contacted me to apologise for the beer being off. It had obviously become infected and should not be been sold he said. Thank you for your honesty and kind apology.)

Anyway, I hope you had a good Hallowe’en and here’s to enjoying the Kinnegar offering when it appears.