The journey to discovering craft beer and real ale (let’s band them together and use the term ‘tasty beer’) is long and winding for some.  Less so others.  I’m in the ‘some’ category.

My earliest memories of beer in the early 1980s are of an uncle drinking cans of Carlsberg Special Brew and my Dad having the occasional Satzenbrau in the rugby club.  Fast forward ten years to the early 90s and I discover the world of 0.5% Shandy Bass – please don’t laugh – followed by pints of snakebite or purple nasties on a Saturday night while grooving in a club to the likes of The Shamen and Utah Saints.  Remember them?

The lager-with-flavouring phase naturally led onto the lager-with-no-flavouring phase.  Literally.  No flavour.  Yellow bland fizzy beer-water that’s guzzled by the million (or so) pint load every weekend across Northern Ireland.  With this country being a real ale desert, especially in the 90s, there was little or no choice for young folk to develop a taste for something different from the usual Harp-Tennents-Bud etc.  Belfast may have had one or two choices but in every town, choice was zero.  I studied in Scotland but even in the town where I lived there was little choice.  I recall feeling like death after a night of drinking Bass and said I’d never touch the stuff again – although maybe the bottle of Blue Curacao I also had that night was to blame?  Perhaps.

It was the desire for choice, as well as a developing palate and badgering by my brother, that eventually led me to drinking Guinness.   It wasn’t yellow or fizzy.  The black stuff just about sufficed for a few years but I wanted more.  I wanted … different.  Then it happened.

That’s when I took part in a charity motorcycle ride from Northern Ireland to the Isle of Skye.  The first night we stopped into the enchanting Drover’s Inn near Loch Lomond where I discovered Deuchars IPA and the legendary Monster Burger.  The burger comes with its own defibrilator. 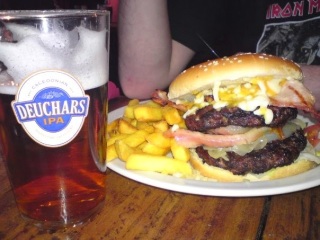 That was followed the next night on Skye, by the Isle of Skye Brewing’s Hebridean Gold (now called Skye Gold) and Williams’ Fraoch Heather Ale.  Manna from heaven!  Another bike tour of Devon and Cornwall happened later that summer and the rest, as they say, is history.

So when you’re buying your next bottle or pint of ‘tasty beer’ be thankful for the choice and that it’s not 1992.  I don’t think I could re-live Billy Ray Cyrus’ Achy Breaky Heart.