The past twelve to eighteen months have been fantastic for the Ulster beer scene.

Alongside the established and newer breweries, since late 2012 this small part of the world has seen the introduction of Sheelin, Pokertree, Red Hand, ClearSky, Kinnegar, Muckish Mountain and Donegal Brewing (I referred to Ulster instead of Northern Ireland as I wanted to include the last three there from County Donegal).

Add to that list the newest baby to the fold, Farmageddon Brewing Co-op.  Based just outside Ballygowan in County Down, they have just last week released three new brews to the eternally grateful Norn Iron following.  So how do they fare?  Let’s start with the Gold Pale Ale.

This 4.2% ABV gold pale ale is well carbonated and light and floral on the nose.  The floral theme continues into the taste combining with elements of sharp grapefruit citrus.  The citrus continued to develop with each mouthful and although I enjoyed the Gold, I don’t think it’s a beer I could enjoy over and over again in one go.  If you’re a fan of light ales that pack a punch of grapefruit flavour, then this is for you.

I was much more satisfied, however, with the deeper and darker India Pale Ale.  It has a higher alcohol content at 5.5% although it really isn’t noticeable.
What is noticeable though is the mellow sweetness of the India compared to the Gold.  Where the Gold has a citrus bang, the India is much more rounded and smoother.  Caramel tones exude from this beer and it’s an ale that I could enjoy frequently in one session.

Finally the 5.2% India Export Porter.  I’m a fan of porters and I was looking forward to this one most. Excellent carbonation, a great dark brown colour with a not-overpowering aroma of coffee.  On tasting, dark chocolate and bitter espresso came to mind.  This was polished off in no time at all, another quality brew. 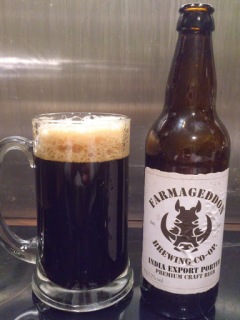 By their own admission, Farmageddon have big plans for the year ahead. They’re planning specials such as a Cascadian Dark ale, Single.Malt.And.Single.Hop aka S.M.A.S.H (various different hop types) as well as a Rye pale ale, a dubbell, double IPA and Imperial stout.

They’ve also planted 360 heritage cider apple trees and hope to reap the rewards of that in the next year or so!

I always thought ‘armageddon’ meant ‘end of the world’ but after tasting their three new brews I really hope that rather being the end, this is the start of a great new chapter for the Ballygowan business. Maybe they should be renamed … Genesis?