One minute it’s 1993, I’m in Ballymena’s Tullyglass nightclub on my 18th birthday, downing pints of snakebite (half Harp/half Strongbow, yes really) with my mates and before I can say “education, career, marriage, mortgage and kids” – it’s 2015 and I’m turning 40.  How the heck did that happen?

Thankfully I’ve discovered better tasting beer in the past 22 years.  Though it wouldn’t really have been difficult would it?  The folly of youth and all that.

Last weekend my very secretive yet fantastic wife organised a surprise 40th birthday party with a few guests and this quick blog post is merely a thank you to the clever folk who brought some beer. Good beer at that, too.

A massive thank you to Isle of Skye Brewery’s head brewster Pam and former owner Angus for not only supplying (as a present) and personalising labels on a copious amount of Skye Gold and Ardmore Beast but then making the long journey over to Northern Ireland to attend the party!
With an additional ingredient of in-house milled porridge oats, the sessionable 4.3% ABV Gold has a faint grassy aroma and is light and slightly bitter on the tongue.  It came 3rd in the 2014 Belfast Beer and Cider Festival and is the perfect beer to appeal to a barbecue crowd. 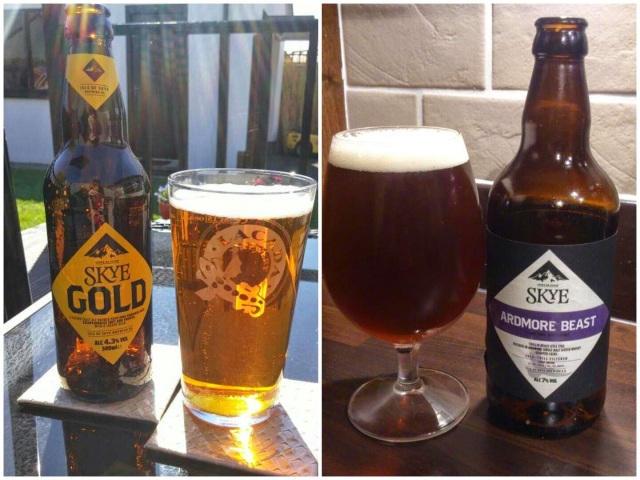 In complete contrast to that however is the 7% ABV Ardmore Beast.  I love this but I’m already a big fan of finely brewed ales that have matured in Scottish whisky casks.  With its distinctive Scotch whisky aroma and taste it’s a winner for me – Pam and Angus already knew it was one of my favourites hence them bringing it over.  This beer is the result of maturing Skye’s Cuillin Beast for two months in Ardmore Whisky quarter casks, resulting in a full-bodied red ale with a smooth and not overbearing smokiness.

And to top it all off they brought a quality selection of brews from their colleagues at Loch Ness Brewery near Inverness. Slàinte mhath guys!

Also big thanks to the two Pauls and Phil for their present “40 Beers for 40 Years” – two boxes of beer ranging from the legendary and far-too-easily-downed Brewdog Punk IPA to selections from Weird Beard, Williams Bros and Jack Cody.

Honourable mentions also go to Mark and Elaine for the bottles of Glenrothes and Jura whiskies.

3 thoughts on “How Did That Happen?”