Skip to content
So I said before that it started with Inishmacsaint.
Previously I told the story of how I developed a bit of a fascination with Inishmacsaint beer from Fermanagh.  I initially became engrossed with finding out about the name and history of Inishmacsaint island – and this developed into thinking about travelling there to have a photo taken with the beer bottle in front of the Inishmacsaint sign.  This quickly developed to other places in Northern Ireland that were closer to me (in Carrickfergus). Whitewater’s Belfast Lager and Clotworthy Dobbin (Antrim), Hilden’s Halt and Cathedral beer and Ards Brewing Co’s Ballyblack were all done and dusted with relative ease. 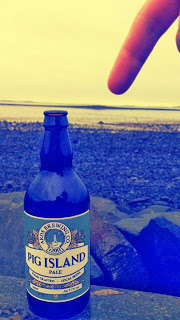 However some others such as Ards Pig Island was another matter altogether.  The brewery is extremely small and production has been scaled down even more as the owner is in the process of building a bigger brewhouse. So imagine my surprise when I ventured into one of my favourite bars, Bittles in Belfast, and there in all its piggy glory were rows of Pig Island! Well you could have knocked me down with an “oink”.  Tasty too, a wonderfully refreshing pale ale with a background hint of orange marmalade.  If you ever have the good fortune to see Pig Island beer, give it a try. 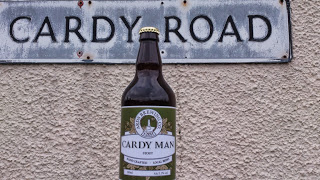 With the bottle secured for future photographic fame all I had to do now was find the island – easier said than done. Sure it might be common knowledge to you if you live near Greyabbey on the Ards peninsula, but I’m a County Antrim man and (in a John Wayne accent) “I ain’t from around these parts boy”. 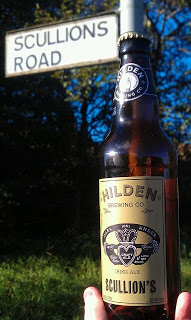 Tinterweb’s a wonderful thing though, a lot of time spent looking at OS references and Google maps led me to where I had to go and the snap was duly taken (complete with Monty Python-esque finger). Charles at the brewery got to hear of my little mission and also informed me of another of his occasional brews made with cardamom called Cardy Man. Quite a good play on the name I thought. And guess what, Cardy Road is in Greyabbey. Get in there, that’s another photo in the can – or should that be in the bottle.
Other pics in this article include Hilden Scullions at Scullion’s Road in Mallusk as well their Titanic beer outside the Titanic Visitor Centre.  The only problem with that taking that photo was the waiting and waiting…and more waiting for tourists to disappear so no-one would be in the shot!  I think I had a 5 second window to take the photo before another American appeared, waxing the usual lyrical about how their great aunt Sadie came from Cork. 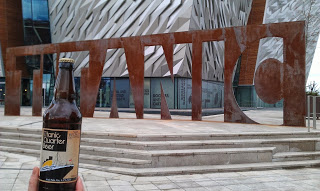